HOD update
The planning staff completed our HOD application (after receiving it back from the state). Now it is their intention to get to the Planning Commission for its Feb 9th meeting. If the PC takes action at this meeting, the case would move forward to the City Council on February 16 to set the public hearing date. Best case, the public hearing would occur at the March 1 meeting of the City Council, and a final decision could even be made that evening. Planning director Ken Bowers stated he felt that, worst case, an approval would happen no later than the April 5 meeting of the City Council. END_OF_DOCUMENT_TOKEN_TO_BE_REPLACED

The new page with links and docs to help understand the myriad and many parts to these huge subjects and why it’s so important to learn.

Apologies to all who have been waiting patiently for this resource, it’s been an effort on our part as well 😉

Our next neighborhood meeting is another special presentation, this time by City of Raleigh Planning staff to talk to us about the UDO and remapping our neighborhood.

Monday Oct 26, at the same place as our last special meeting about the historic district, the Seven Event Studio at 510 Washington St.

Put it on your calendar as this will likely be the only opportunity we’ll have to question these folks in depth.

More info is on the way. 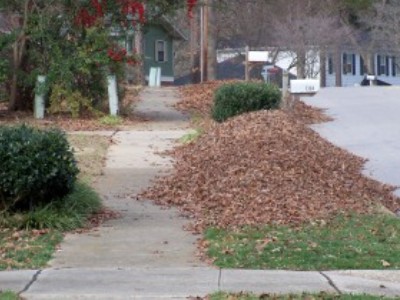 2015 dates for City of Raleigh leaf collection are out, Glenwood-Brooklyn is in Zone 11 for this service.

There are two collections, and weeklong windows for zones 2 & 11 are:
• Monday, November 30
(after Thanksgiving weekend)
• Monday, January 25

There are weather make-up dates and info on how to make sure your leaves are picked up here: Seasonal Loose Leaf Collection Information.

Don’t forget you can always put your leaves and yard waste out every week on your trash pickup day (Thursday) as usual, as long as they are contained in trash cans, paper bags or clear plastic bags, so the crew can see what’s inside.

Check the link above as the dates get closer as they may change due to changing conditions.